If you want to be a photojournalist — or just wish your photos had a more exciting, newsy edge — meet Chuck Zoeller. For the past 24 years, he’s been in the center of things at the Associated Press, the world’s largest and oldest news-gathering organization.

Founded in 1846, the AP has a global news team of 3,700 that includes 200 staff photographers and a network of freelancers. More than 1,000 American media organizations pay an annual AP membership fee for the right to publish AP stories, pictures, audio and video as material for their own readers, listeners and viewers. 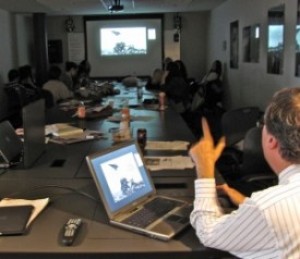 Chuck started at the AP as a photo editor. Then he went on to run its photo archives, which contain about…10 million photos (!).

Now Chuck is creative services director, a job which involves promoting the AP brand of photojournalism via new exhibits, books, videos and lectures.

Here he is, during a recent visit with my very lucky NYU students at our East Village classroom.

We were impressed when Chuck told us that in terms of photos alone, the AP transmits thousands of pictures every single day. He shared some of the most famous shots during an eight-minute slide show — from scenes of wars and mayhem to light celebrity moments. Then he went on to give us advice on taking pictures, photojournalism ethics and how to pitch photos for publication at the AP.

So here’s the scoop from Chuck…

How to take a news photo

1) RULE OF THIRDS is a classic design element that composes a shot by breaking the visuals  into thirds. In the first photo below, Aaron Favila spotted this boy in the Philippines, wading through water after a shanty town fire. The boy is off center with the remaining two-thirds of the frame pretty vacant. The result: more visual interest in the subject — the boy. 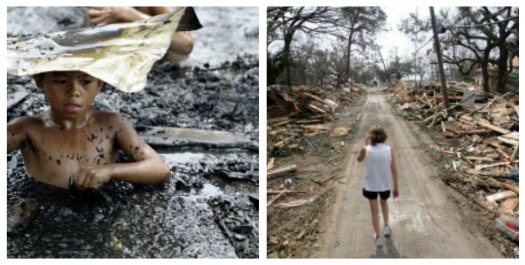 But Chuck also says: “The Rule of Thirds is so classic that if you always stick to it, it gets boring.” To mix things up, break the rule. Sometimes, putting the subject in dead center, or at the extreme edge of the frame, works even better. Case in point with our second photo here — Rob Carr’s shot of a woman walking through Hurricane Katrina’s destruction. 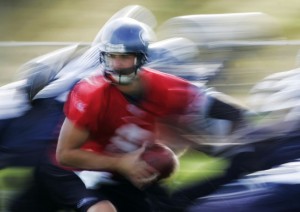 2) BLURRED FIGURES can convey action, urgency and drama. Check out how Ted Warren made this picture work by slowing the shutter speed. Effective blurring is often overlooked as a technique.

But Chuck also says that “blurring can be tricky to execute well.”

3) A HORIZON LINE is an old school approach of making sure the background is a solid horizontal. To get the horizon line, hold the camera level and keep it as straight as possible.

But Chuck says that “there’s a saying: ‘If you can’t take a good picture, take a crooked one.’ Used well, it can be an effective composition technique.” (Beware, though. A gimmicky, tilted photo can be a crutch.) Consider these two views below of Hillary Rodham Clinton during her Monday press conference on WikiLeaks. Evan Vucci took both shots; only one truly grabs our attention. 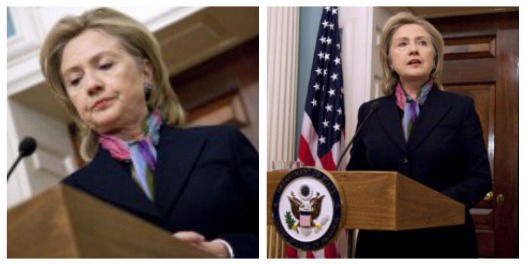 4) NATURAL LIGHT is preferable. In the next two photos, consider the first shot by Aliosha Marquez, which makes good use of available light in covering the arrest of this murder suspect. By finding light from other sources and avoiding the use of flash on the camera, the picture conveys more of the ambient scene; there’s a sense of the setting.

Still, flash can help when it’s really dark. The second shot here was taken at night and AP staffer Apichart Weerawong had no choice but to use flash. The result was a hard, harsh light along with a bright foreground and a too-dark background. 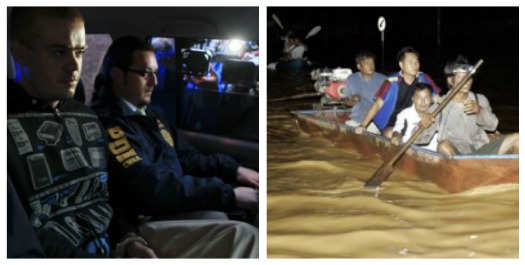 But Chuck also says that sometimes, ”flash will bring something extra to a shot,” like the edgy feeling that is typical of crime scene photography. Ironically, Chuck notes that flash is actually most helpful in bright sunlight. For instance, it can gently fill in harsh shadows if a person’s face is partially shaded.”

These days, everyone uses photo editing tools — from pricey, software packages like Photoshop to free, fun online sites like PicMonkey.com. But don’t mess with a news photo.

6) The content of a news photo can NOT be altered in any way. To do so crosses the line. “When you start adding or subtracting elements, then you’re into fabricating images and your credibility goes to zero,” Chuck says.

7) Avoid heavily saturating a news photo with color. The results might be glamorous, but they’re not true to the moment.

8) Crop news photos with care. Beware of framing a shot that lies. It’s pretty easy to make a close-up of 10 screaming people look like a mob. But if that’s not what happened, you have to capture the facts, maybe from a further distance.

My students had a bunch of questions about the subjectivity of picture-taking. Chuck explains: Yes, cropping or framing a photo selectively can be used to deceive or mislead the viewer. “But at least the photo is still presenting a scene that existed,” he says.

In the end, it’s all about the photographer’s eye — and integrity. “The way you frame and compose a photo takes editorial judgement,” Chuck notes. “You’re trying to convey the story as objectively as possible, and still make it visually compelling.”

9) The AP might be interested in your photos if they’re either newsworthy or celebrity-snazzy. The type of camera you use doesn’t matter; it’s all about content. Consider these two iconic 9/11 shots. They were taken with a basic digital point-and-shoot number by Carmen Taylor, a tourist from Arkansas. She was on a Staten Island ferry boat just as the second plane hit the South Tower. 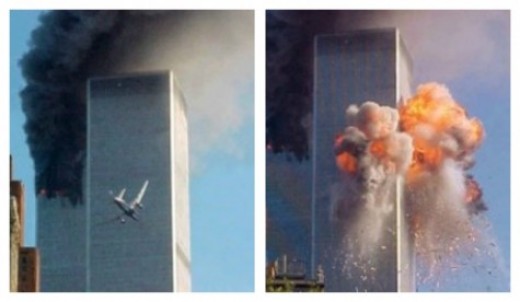 But…if you happen to see Taylor Swift at the laundromat, that could work too. Warning: Chuck says the AP tries to avoid staking out celebs “and other hardcore paparazzi tactics. In all cases, photographers should act professionally, and should not misrepresent themselves as ‘shooting for the AP.’”

And remember, the AP is “licensing” your photo for a fee rather than “buying” it. The standard rate is $125 but anything goes for remarkable photos. (Btw, in case you’re you’re wondering, no — Chuck didn’t mention what the AP paid for these two 9/11 pictures.)

We met 30 years (!) ago at what was a first journalism job for each of us. As rookies, we covered lots of stories together. Then in 1983, he did me a huge favor by taking my wedding pics. The students got a kick out of these ancient photos. But he couldn’t bring himself to look at them until after class, while the two of us were at lunch.

No one was around to watch as he flipped through his early work, shots he hadn’t seen in 27 years. His critique? “Not bad,” he decided. Here are two of Chuck’s photos. One of my moms and me, another of a waiter with our Peking duck: 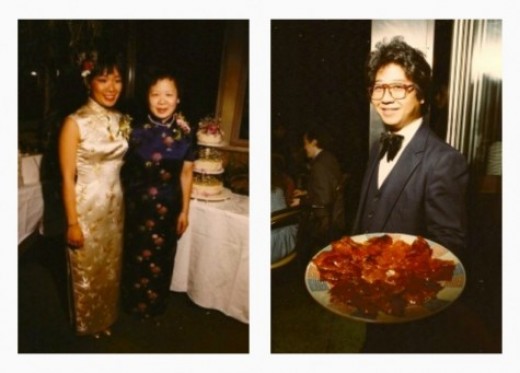 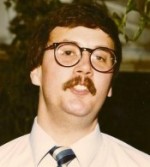 And here’s a photo of what Chuck looked like when he took these shots. Too bad I can’t show you the whole album of both my ceremony and the 12-course traditional Chinese wedding banquet. Even after a decade of divorce, the photos still make me smile.  :)