Last night, I got out of my kitchen to take my first real cooking class. After years of teaching Asian cooking classes to kids, I finally got a chance to play with food myself! What a great learning experience.

The four-hour, $120 workshop was called “Discovering Dumplings.” It was held at the Institute of Culinary Education on W. 23rd Street in Manhattan’s Flat Iron District.

The glamorous classroom was an open space with glass sliding doors. It was packed with gleaming stainless steel tables, counters, appliances and wire racks. There were multiple refrigerators, stoves and sinks. I was very impressed with myself for being there.

I felt even more important once the instructor got things going. Kian Lam Kho presented an insanely ambitious lesson plan that really taught me a lot. 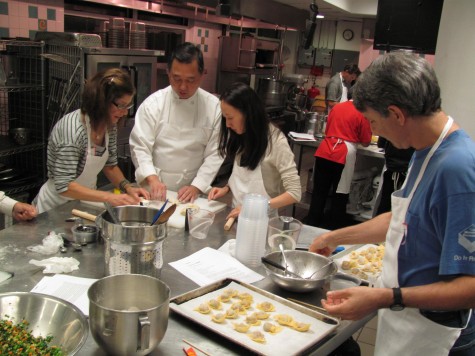 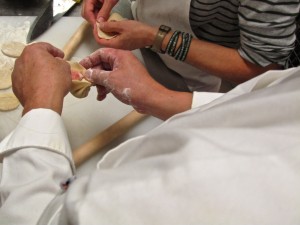 I could never learn this from a book or video. Had to see Kian do this live

The workshop ran from 6 to 10 p.m. We needed every minute because there was a ton of material to cover.

We also learned that these treats can be steamed, boiled, fried or, prepared using a combo of techniques.

A true pot sticker, for instance, is thrown in the pot raw, then somehow cooked and fried. But the vegetarian dumpling, which is made with a sticky flour wrapper, has to be steamed in a steamer before it’s fried in a pan. 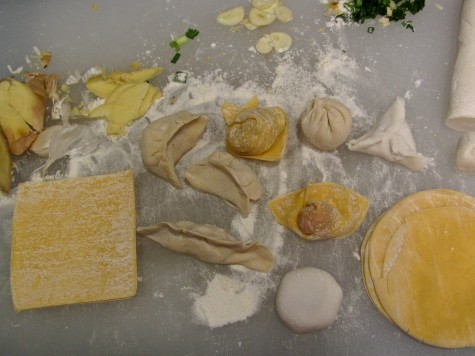 The eight shapes we made are in the center. They are surrounded by sliced ginger and garlic. In addition to making our own dough, we used store-bought wonton skins (the square skin is in the left corner of this photo; the round one, in the right corner)

The 14 students were divided into three squads with each group making three types of dumplings. During this workshop, I finally — finally! — learned to wrap wontons. There’s a move involved that’s tricky for lefties like me.

Two of my patient squad mates, Andi and Valerie, walked me through the steps over and over until I got it. Working with them was such fun. In fact, the workshop was filled with nice people (and only one or two annoying ones). 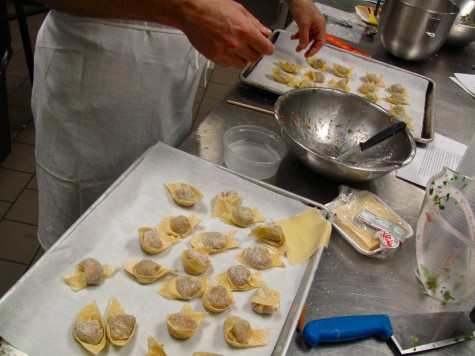 The filling is pork & shrimp. I want to try making veggie wontons for my vegetarian daughter

Kian also taught me basic stuff that I never knew… 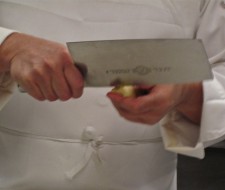 This technique was new to me

TIP: The easiest way to peel ginger is to take the edge of a spoon and scrape the skin off.

Kian says he’s usually too lazy to grab a spoon and simply uses the back edge of his favorite cleaver. But you have to be careful; don’t cut yourself.

Yes, cleavers are scary-looking knives. But very handy for the chopping prep required in Chinese cuisine.

Another tip…Kian, who is passionate about classic Chinese cooking, explained that “real” Chinese cooks don’t mix ginger in pork dishes. The Chinese trinity of aromatics — ginger, garlic, scallions — is featured in most recipes, in part because ginger counteracts the animal taste of meat. But pork is considered neutral and not game-y enough to need it.

Even though I’m very do-your-own-thing in my approach to cooking (and life), I appreciated learning the rules. As I always tell my journalism students, we need to know the rules so that when we break them, we’re aware of what’s happening. So yes, I’ll still use ginger with my pork dishes. But now, I understand that it’s a creative decision. 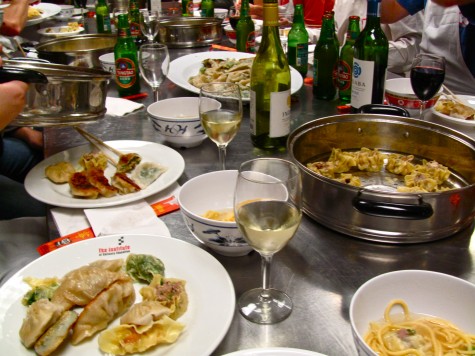 By 9:30 p.m., we were ready to sit down and sample our handiwork. To be honest, they were, um, interesting. Some dumplings were too hard or too big, too lumpy or too soggy. 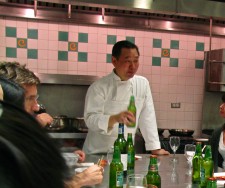 Then again, a few were quite tasty. Judging from the happy chatter around the table, we had had an excellent learning experience. Who knew making dumplings required this much skill.

The dough has to have just the perfect elasticity. Kian says to do it by touch; the texture has to feel right.

“It’s all just practice,” he kept reassuring us. “After you’ve done this a couple of times, you’ll be fine.”

And will I do that? Hmmmm. Maybe. As Kian noted, making dumplings is a great party activity. Everyone can get involved. I’d also love the chance to create my own fillings. So we’ll see!

For more about Kian and classic Chinese cooking, check out the elegant recipes on his blog, “Red Cook: Adventures from a Chinese Home Kitchen.”

And for more on Chinese dumplings, click HERE for my post on how I met Kian at a panel discussion on this favorite comfort food. He was one of the speakers and I had the honor of moderating the talk.   :-)