My three-week trip to India included a 36-hour stopover in Mumbai. Formerly known as Bombay, it’s the world’s most populated city in the world’s second largest country. In 2008, it made headlines because its most super-luxury hotel was attacked by terrorists. So you know I had to stay at the Taj Mahal Palace & Tower.

For a century, the Taj was just a gorgeous, century-old grand dame sitting on the harbor along the Arabian Sea. Its website still brags that is has hosted countless presidents, rock stars and kings. Then two years ago, terrorists stormed the splendid lobby, killing more than 150 people dead and injuring hundreds of others. By the time the carnage ended, the Taj’s distinctive Moorish-Florentine complex was a smoking, bloody wreck, blown apart by exploding grenades and gunfire.

On Aug. 31, I checked in to check out what has happened since. Along for the ride were my daughter and her two friends: three American, travel-weary teens who had just spent nearly a month of roughing it in south India.They were tired and cranky, making them tough critics. The following night, we were bracing for a 16-hour flight that would take us back to New York. As it turned out, the Taj was a perfect place to regroup before heading home.

We landed in Mumbai’s airport on a rare, rainy day. Because of the weather, the drive into the city took nearly 90 minutes — double the norm. 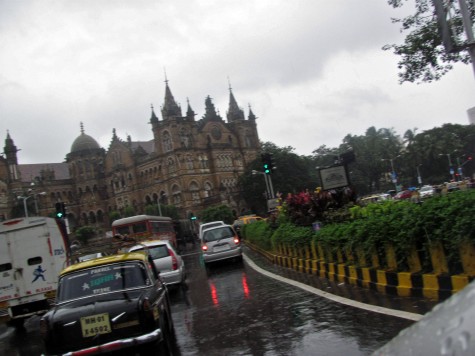 Mumbai taxis are yellow and black

Just ahead was the glitzy Taj entrance. But getting through the front door was a major security process. All approaching vehicles must line up and pop open both their hoods and trunks for inspection. If the vehicle is permitted access, three  cylindrically-shaped barriers that guard road entry sink to the ground to permit passage.  Then, they rise up again to deal with the next car. 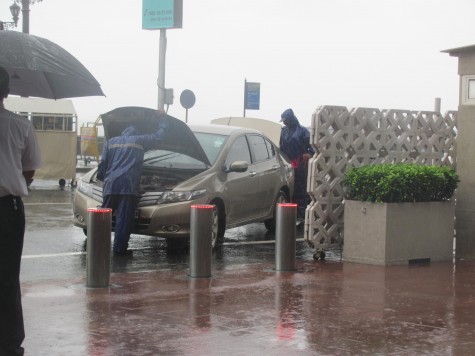 Getting into the hotel takes a while 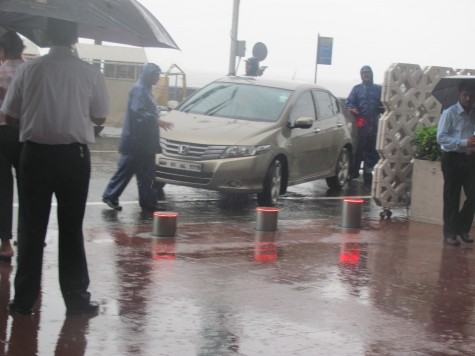 This car makes the cut. The pillars, rimmed in red lights, start going down 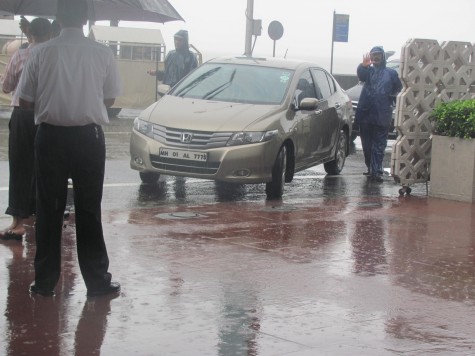 The security barriers have sunk into the ground. Once this car passes, they'll rise again 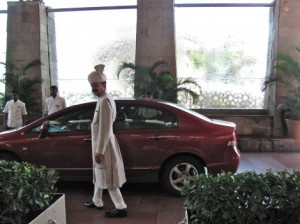 Security at the re-done Taj is very impressive.

We were greeted at the entrance by uniformed bell boys and doormen who were all over our luggage. Lush plantings and fine stone woodwork let us know that we were entering a different India. But first, there was more security…

All visitors walk through a metal detector. Bags and packages are checked by an x-ray machine.  From here, a spin through the revolving front doors landed us in a glamorous lobby that smelled like power and felt like being inside of a jewel. Sparkling crystal chandeliers, orange decor that glowed like a rich blend of spices. 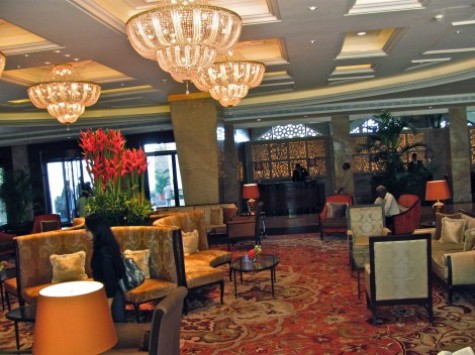 There was also more security. Men in dark suits with wires in their ears were strategically stationed near elevators. This was a weekday afternoon so the Taj, which has 11 banquet rooms, was bustling with events. The crowd was mostly Indian;  their Western dress-for-success styling marked them as monied folk. A few TV camera crews were hanging around too. 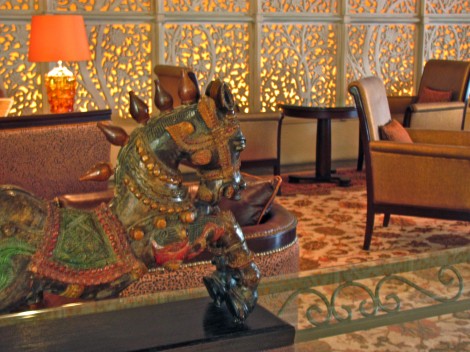 Pretty, isn't it? Orange is a hard color to work with but this lobby glowed 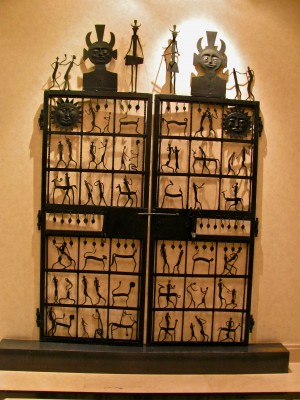 I was very happy to wander the marble hallways, looking at everything

Everywhere, we saw lovely Indian paintings, sculptures and ceramics. Hundreds of works were damaged in the 2008 bombing. But the Taj brought in specialists to restore its treasures. The celebrated collection harkens back to the hotel’s past life as an art world player during the 1950s and 1960s.

At the receptionist desk, our reservation was handled by a sexy young woman in a belly button-baring sari. She spoke impeccable English and personally escorted us up to our rooms on the 11th floor of the Tower.

This older section of the 560-room hotel wasn’t really damaged two years ago. So our bathroom, with its fresh orchids, had older fixtures. Still comfy, though. Meanwhile, the actual furnishings felt luxurious and new.

The free fruit basket was also a nice touch. Sadly, Internet service didn’t work, even though we paid an extra $10 for it. (At the end of our stay, the charge was deducted from our bill.)

Reservations for a night at the Taj range from the low $300-range for a queen bed to more than $1,000 for a suite. Lucky me — before leaving New York, I booked in advance through Expedia.com. The travel website gave me two rooms, each with a queen bed, at $250 per. What a (relatively great) deal! 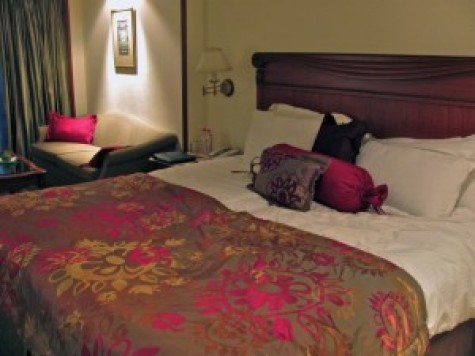 This was plenty luxurious for us

As it turns out, the Taj is one of 66 high-end hotels that the Mumbai-based Tata Group owns throughout India. Tata also has 16 more hotels overseas, including three in the U.S.: the Taj Boston, the Taj Compton Place in San Francisco and The Pierre in New York City.

By the time I left India, I understood the muscle behind the “Tata” name. This family-run empire casts a Big Brother-ish industrial shadow across India. Its holdings include everything from steel mills and auto plants to financial service and tea companies. Even the free bottles of water in our room were Tata products.

The Taj really knows how to do great food. But at a price. Its 11 restaurants are themed and decorated to the hilt. We were ready to eat in the middle of the afternoon, which left us one choice: all-day dining Shamania cafe. It’s $40-per-head, all-you-can-eat buffet was a sumptuous spread served by a hovering, friendly waitstaff in crisp uniforms. The white starched linens, sterling silver platters and fancy h’or doeuvres were initially a bit intimidating. But gluttony got the better of us. 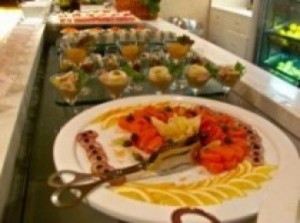 The homesick children — all vegetarians — indulged in Western goodies that they hadn’t seen in weeks. Focaccia, baguettes, pastas, cheese plates, olives. My pescaterian daughter, who eats seafood, filled up on lox and shrimp. I was all over the stir-fried chicken, smoked ham, fresh salad greens. 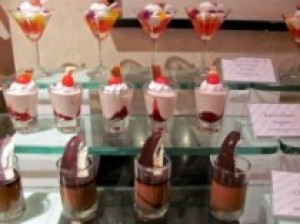 After a few helpings of the savory stuff, they dove into dessert. Multiple times. Cookies, cakes, ice cream, mousses, tarts and more. The nice waiters kept up with us, constantly whisking away our used plates.

Later that night, we dined at Souk, the Taj’s Middle Eastern restaurant. Oh man, it was some of the best food and service ever! Wish I had my camera because the presentation was exquisite without being snotty. I ordered a whole stewed chicken and after three weeks of traveling with vegetarians, ate nearly all of it. When we told the waiter that we’d just returned from south India, he gave the kids an extra rounds of virgin fruit drinks and kept re-filling my glass with complimentary wine. Our 13-year-old boy critic declared his chocolate dessert one of the 10 best he’d ever had.

If I was an adult, I definitely would’ve explored Mumbai night life. Like New York, this is another city that never sleeps. But the kids and I were happy to wander the Taj, which has a spa, workout room and yoga room.

One look at the spa’s Manhattan prices and we were outta there. Instead, the girls and I sat in the (free!) steam room which was artfully tiled in white. Later, the kids used the workout room treadmills while I puttered in the yoga room.

The next morning, we woke to a gloriously sunny day. Or, at least I did. The teens slept until nearly noon. But at 8 a.m. I was in the pool. Twelve hours later, we would be jammed into economy seats on a flight bound for the U.S. Here was my last chance to stretch. A few months back, I had learned to swim. Now I was in doing laps in a most decadent setting. My private pool, with water-spewing lion statues. Mmmmm. 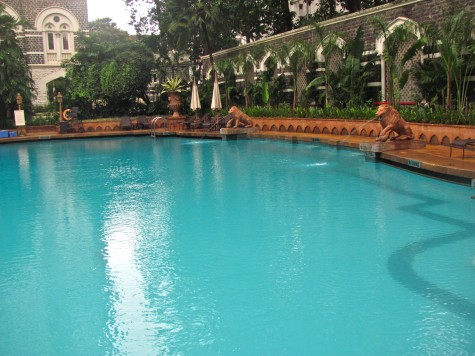 Swimming here on a quiet a.m. This pool was all mine 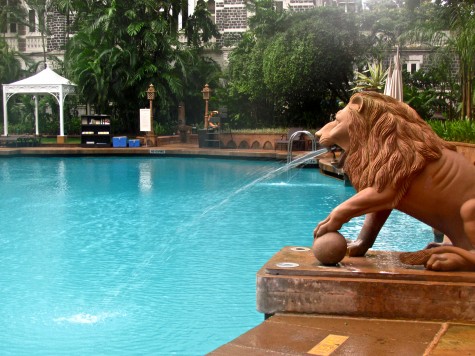 When the kids finally woke up, they worked out a bit. Then, we left the Taj  for our first and last afternoon in Mumbai. During our 36 hours, here are the sights that we covered: 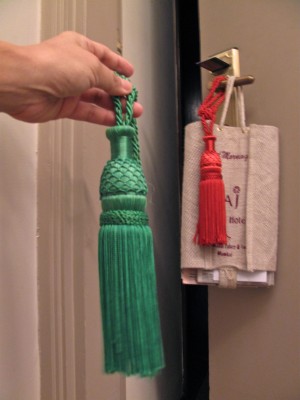 Hang a red tassel for privacy; green is a request to have your room tided up. Linen bag holds the morning paper, in English

So that was our trip.

As for the total tab for a 36-hour stopover in Mumbai:

An Indian friend in New York sprung for our driver (such a thoughtful gift!). And we probably spent another $350 on shopping.

Expensive? Well, it was worth it.