For a delightful — and somewhat disturbing — view of India’s relationship to nature, check out Hogenakkal Falls. This major tourist attraction is far more interesting than America’s Niagra Falls. It actually reminds me of an all-natural water amusement park filled with friendly monkeys, amazing boat rides, sweet little beaches and sadly, too much human litter.

Hogenakkal (pronounced ho GEN ick all) sits at the foothills of the lush Eastern Ghats mountain range in Tamil Nadu’s Dharmapuri District. If that reads like gibberish to you, let’s put it another way: Hogenakkal is hard to reach. To get here, we logged hundreds of miles on the New Jersey Turnpike-style highways that now criss-cross modern India. Then we slowly rumbled through small towns and even tinier dusty villages before climbing twist-y mountain roads.

Up here, the lush landscape is all about deep blue sky and monkeys rustling in leafy trees. The air  smells fresh and green. We parked in a makeshift dirt lot packed with cars and the occasional roaming cow. After strolling past vendors selling towels, T-shirts, crated live chickens and barbecued fish, we were spellbound by the Kaveri River’s power as it crashed down ancient cliffs. 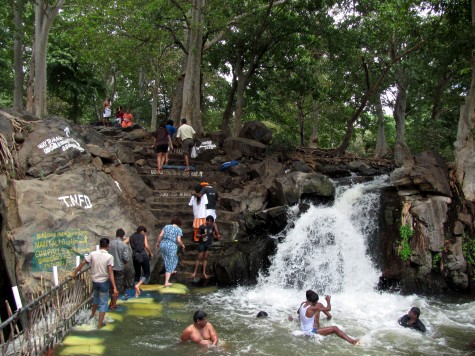 Please notice that only men are frolicking in the water. In this socially conservative country, it’s okay for guys to go shirtless in swim trunks. But the women stay covered up. So unfair. Well, we dealt with things. Later. Keep reading. 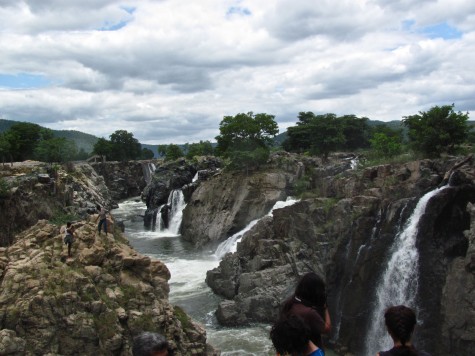 Natural waterfalls big & small, more numerous than we could count.

Our first priority was the view. The thunder of multiple waterfalls was simply symphonic. Being this close, we could feel them pound through us while they sprayed us in a soft rain. Check out the misty mountains in the background.

From here, we headed for the boat tour. It cost 100 rupees (about two bucks). None of us had ever seen round bamboo boats before. We soon learned that their saucer-like shape makes it easier to navigate the strong, swirling currents. 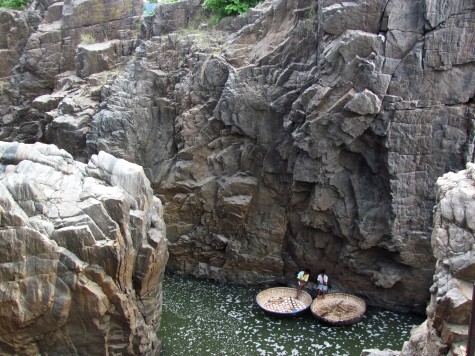 The cliffs were as dramatic as the waterfalls.

Going down these steep stone steps made us nervous. 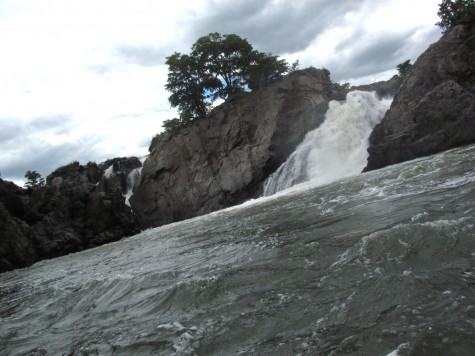 The view from the boat: an unforgettable ride for the six of us.

As the only non-Indians around, we were a minor tourist attraction of our own. People took photos of us (while we took pictures of them). What a sight: brown Indian dad and white American mom, with yellow Chinese me and our collective of three beige children (two girls and one boy). Based on the amused stares, it seems that people found our three boisterous multi-racial American kids quite entertaining. 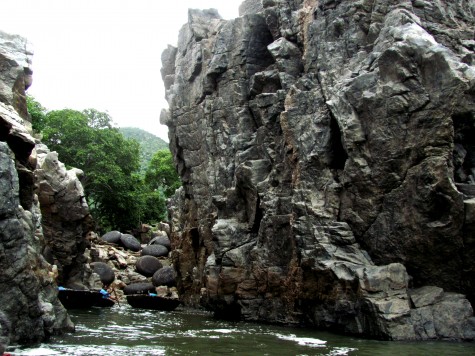 Two round boats navigate their way through some cliffs.

This unique cruise was tons of fun. There were happy water fights between boats. Here and there, we spotted fishermen sitting high up in the rocks, casting with what looked like mere string. Not a fancy fishing rod in sight.

Our boatman leads the way.

During the middle of our ride, we paddled over to a tiny strip of beach. Our kids ran screaming into the water with their clothes on. That left us moms with no choice but to wade in after them. As for Dad, he started chatting up the vendors who were offering snacks — and ($2) head massages.

And yes, Dad went for a head rub. Since you know I can’t resist any form of massage, I went next, followed by my daughter. Mmm. Before we climbed back in our boat, Dad suggested we do a good deed by picking up trash.

Which brings us to the ugly side of our excursion…

Thankfully, the waters along the boat ride are still pretty pristine. But everywhere else, there was the depressing sight of discarded plastic bottles, forgotten sandals and underwear, crumpled newspapers and empty potato chip bags. Near one rocky patch of beach, we also found broken glass and empty liquor bottles. I wish I could show you photos but it didn’t occur to me to take any pictures until now. We gathered armfuls of crap and dumped it in a pile. Some of the vendors even stepped up to help us. Then we got back in our boat. 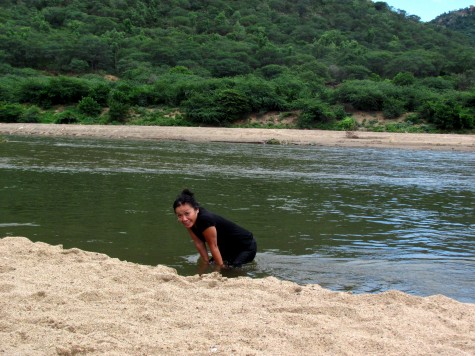 I wasn’t too crazy about getting my clothes wet. Btw, the currents were strong.

Before leaving Hogenakkal, the kids were dying to feed  the monkeys. We found a group of very social simians hanging around the  food vendors shacks (of course).  One little cutie was licking rice off a plate while another one tried to snatch a bag of Lays potato chips out of human hands. I know; we shouldn’t be domesticating wild animals, let alone showering them with junk food. But after picking up garbage, I was tired of being preachy and ready to go with a when-in-Rome moment. xoxox.

Watch out – the boldest of these little guys will snatch the bag right out of your hand!