To find work in journalism, it’s usually about who you know. And for a good place to start learning the art of the schmooze, go to events sponsored by journalism groups.

Last night, I found quality networking at the annual gala for the South Asian Journalists Association (SAJA). It was worth every penny of my $100 ticket. Most of the attendees at this sold-out fundraiser were, of course, South Asian. Those who weren’t still had some kind of connection — an interest in the culture and/or its issues.

Watching the crowd work the room at Columbia University’s Low Memorial Library, it was obvious that SAJA has elevated networking to a high-powered sport.

The four-hour gala began at 6 p.m. with cocktails. Then it was on to dinner where a dozen students received $16,000 in scholarships and 10 reporters received outstanding reporting awards in 10 categories. Organizers even squeezed in a panel discussion about journalism’s future.

We were outta there by 10 p.m. Good thing, too, because the dining hall had no air conditioning on a 86-degree city night. There were corny jokes about the “sub-continent”  theme of this party for very “hot” guests. Everyone also took the self-serve buffet line in stride.

No A/C. No fancy decorations. Not even a waitstaff to serve individual plates of food. The acoustics were also tough..is this any way to run a so-called “gala?” In this economy, my answer is an enthusiastic “yes.” The evening, with women and men dressed in gorgeous ethnic gear, sent me the message that SAJA watches its cash. Maybe this is how the group can afford to dole out a total of $25,000 to various professional reporters in need of funding to research their stories.

Afterwards, I went home sweaty but happy and impressed. Here’s what the evening gave me:

SAJA (pronounced SAH-jah) is one among several journalism groups organized along diversity lines. Their role is to give voice to communities that are under-represented in the media. (Which means making sure that the news organizations that make money in our communities and are controlled by a few rich, straight, old white guys reflects more than just their elite views. But oh, I shouldn’t write that. I should behave and do a nice post here.)

From what I’ve seen, you don’t have to be of a particular ethnicity or persuasion to join these groups. Most of them also offer discounted student memberships and usually run educational, networking and fundraising events year round, plus an annual convention. These gatherings can help your career and sometimes, your love life. All kinds of, um, socializing goes on — especially at the conventions.   ;-)

There are also organizations built around specialities, like for sports journos or science & environmental writers. To assess an association’s quality, check out where key members work. If very few of them are employed at major news outlets, then you’re probably not dealing with players (but they might be good people). Also note the corporate sponsors — if the big names are courting favor, you know the group has juice.

Here’s are some links for you to look at:

And, some photos from last night. To ZOOM in, CLICK on the photo. 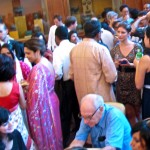 Schmoozing over cocktails; you had to buy your own drinks 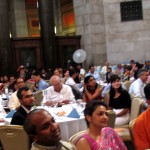 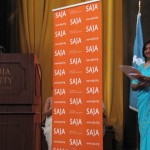 SAJA President Jigar Mehta at podium while Vice President Anusha Shrivastava looks on. He is a Knight Journalism Fellow and she’s a reporter at Dow Jones Newswires 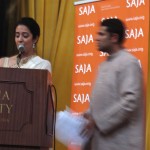 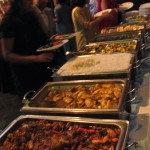 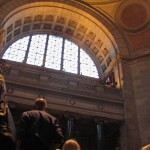