I just bought a new camera and a new camcorder! Even though I’m not gadget-y, learning these two tools will be exciting. Yes, expect better photos on this website. I also have fantasies of posting videos about our cats…I know what you’re thinking, that I’ve been single too long and have turned into a cat woman.

Haha. Maybe so. Lately, I’ve been getting That Look from many of my friends — and from my daughter, too. They usually listen supportively while I rave about the thrills in taking painting classes and creating a WordPress blog. But I can read the unspoken subtitles in their eyes: “You’re starting to get really weird. When are you going to start dating again?”

Soon. I promise. Right now, though, I’m enjoying the freedom of wandering and exploring. Hey, it’s taken me nearly half a century to even figure out my personal definition of f-u-n. Never EVER did I think those three little letters would encompass anything tech-related.

Which brings me back to the point of this post. Look at all the great stuff I just bought. I think I got a pretty good deal. Would like to get your opinion. Here’s the list: 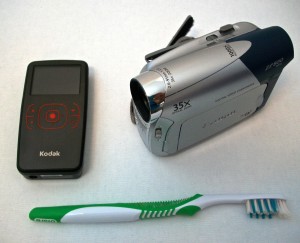 I’ve never really used a video camera before. Bought a camcorder a few years ago but used it maybe once. This new one is so small and simple to use that the prospect of shooting video seems much less intimidating. (Still can’t believe its size relative to my toothbrush!)

When my daughter was little, I took photos of her with a basic box camera. Video seemed like scary man tech stuff. Thankfully, her dad shot some video of our Princess as a baby. Regrettably, we have nothing else to watch on screen. Her wobbly first steps and the elementary school birthday parties are simply memories in our heads. Too bad; wish we had more.

So I foresee a certain amount of personal empowerment in learning to use my camera and camcorder. And with journalism becoming such a multimedia enterprise, developing some basic skills in this area has become a must. Wish me luck!