In the last hours of my mom’s life, I suddenly realized that she was my muse. I’ve never had a muse before. While she was alive, I definitely did NOT consider her muse-worthy. Mom was just too demanding, manipulative, needy and controlling. As a muse, though, she’s actually quite sweet. But because of the problems I’ve been having with my blog lately, I can tell she still likes to take charge.

As readers of my blog know, I consider the whole blogging process to be pretty cosmic. The most unexpected things have come out of me. Writing and laying out my posts taught me things about being a creative person in the moment. The blog helped me find parts of myself that I didn’t know were missing. I’ve gone from techno-phobe to being passionate about all things online. Playing with colors on my blog motivated me to take up painting. And who knew I’d be comfortable blabbing on and on about my personal life??!

All this good stuff was going on when my mother died in early February. Funny, just before she passed, I lost all the comments on my posts. The reality is that I was messing with the software and jammed something. But I felt a little suspicious about the timing. It was just too coincidental; the end result was that you could only comment on the posts I was writing about her. It seemed so like Mom to have found a way to be the center of attention.

Losing my comments was devastating because, as you know, bloggers live for their comments! That’s when I started thinking about re-doing my blog — which got me re-evaluating who I am and what I want to do with my creative life. Oh, okay, Mom. Maybe I needed a push. Thanks for helping me grow.

Then, fast forward to last week. My laptop’s hard drive crashed. I lost all my blog posts from April — all the things that I wrote while I was trying to move on and get past Mom’s death. The objective reality was that I forgot to back up my latest posts. But still…am I the only one feeling like Mom is still meddling in my life?!

Now that those old posts about her are once again front and center on my blog, I decided to re-read them. That’s when I realized how much I miss her.

Up until now, I’ve been doing a really good job of soldiering on. And yes, it’s been a relief to know that she’s at peace, which gives me peace too. It’s also been quite amazing to be let out of the emotional cage of having to worry about Mom and cater to her.

But with her little face back on my blog’s home page, I’m feeling sad that she’s gone. Even though she was such a pain in the neck, she was astounding during her dying days. She became the mother I never had, the one who said out loud that she loved me — and showed it by listening to every word I said.

During one of those final, fading quiet chats, I told her that she had become my muse. By then, she couldn’t talk anymore and was staring into space. But I felt her joy leap up out of heart right at me; the whole room seem to shift into another, rather mystical dimension. I also told her that she would never be forgotten because I had a hunch that I would be writing about her in the future.

Since then, I’ve been thinking about the two manuscripts that I wrote several years ago. They’re both novels that were never published, imperfect projects that I just don’t want to deal with anymore. While they were still breathing, vital works-in-progress, I had a group of friends read them. And everyone said the same thing: the best character was the demanding Chinese mother and how she related to her grown daughter. I’ll bet you can guess who they were modeled after.

The praise came again when Mom died. A lot of people have told me how much they liked my posts about her final days.  A friend recently lost her own mom and said that the things I wrote here helped her cope. That really touched me.

Clearly, as much as I want to get past Mom and blog about quinoa, my finances, my visit to Phoenix and ballroom dancing, she won’t have it. She wants me to remember her. To feel her. To mourn and miss her. To remember what it felt like to hold her soft, smooth hand, to see her smile, to hear her voice.

She wants me to know that I am loved, even now, from beyond the grave.

If this is what it’s like to have a muse, I’m ready to go with it. 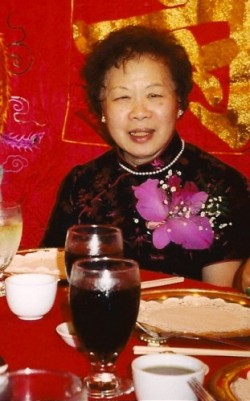 Mom on her 80th birthday