Korean food has always fascinated me. Even though it involves many of the same Asian ingredients that I use in Chinese cooking, what a different personality! To finally feast on this robust cuisine at Han Bat Restaurant was a celebration of flavors that were salty, savory and sometimes, spicy.

While I always knew that Manhattan in the West 30s was home to tons of Korean businesses — jewelry stores, wholesale shops, etc. — I’d never eaten there. Turns out the entire block of West 32nd Street between Fifth and Sixth avenues is Korean restaurant row. Many of these eateries are open 24 hours.

One of the best restaurants in this interesting neighborhood is Han Bat.  So says Sabina,who took my summer “Journalism Basics” course at The New School. I was thrilled when she invited me and Andrea — who also took the class — to an amazing dinner there.

The meal began with a bunch of little plates that were freebie starters. Honestly, if you gave me a bowl of rice, these Korean tapas were enough to make a meal. The samples included: garlic ramps; dried anchovies; napa kimchi cabbage; regular kimchi; green salad; plus, of all things, elbow macaroni salad with ham and corn (!).

As we ate, condiments were key players. Sabina said we could splash soy sauce-based  ganjang on almost anything. (The other ingredients in this sauce-y table staple are sesame seeds, garlic and scallions.) Drizzling it over a plain ole‘ bowl of white rice is delish.

I had no idea that Korean flavors were so intense. With a feeling that approached both horror and awe, I watched Sabina glop hot sauce on her dish like it was ketchup. And forget about salt shakers — just dole out big spoons of the white stuff. My mouth went into sensory overload but I couldn’t stop eating. Now I’m curious about Korean breakfast. I’d like to try that some morning. Until then, thank you Sabina, for sharing! 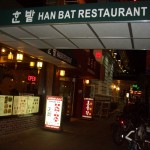 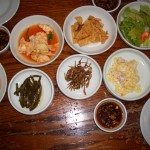 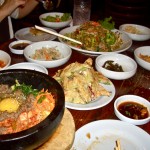 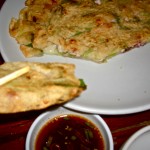 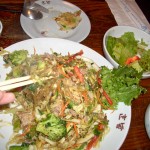 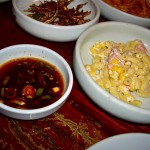 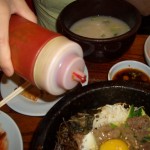 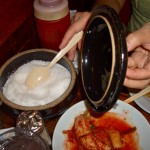 Pour on the salt 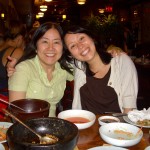