Since everyone wants to do the feel-good thing and feed the homeless today, my daughter and I were privileged to score one of the hottest invites in town. So this morning, we went down to the Bowery Mission. And we were humbled by an experience that turned into our best Thanksgiving ever.

We spent eight exciting hours in an exhausting whirlwind of hundreds of meals. The eats were served in the chapel, which was converted into a dining hall for the occasion. Since the mission is the beloved granddaddy

of NYC homeless programs, the whole day was a media event with photographers, reporters, camera crews — and even a documentary filmmaker — dropping by for quotes, pics and sound bytes.

Being part of it all felt surreal. This is the first time I’ve ever volunteered at the mission. Yet this place is part of my childhood. When I was growing up in Chinatown four decades ago, the entire Bowery was a skanky  boulevard littered with hypodermic needles, flophouses, strung-out whores and people we called “bums.”

Now the street is Hipster Central. Cute bars and trendy shops galore. But standing steadfast in the changing scene is the Bowery Mission, a Christian outreach organization that has spent the past century running programs for the down-and-out.

To be honest, one of the reasons I’ve avoided the place is that I’m not much of a church person. But even though the Thanksgiving Day guests had to sit through a little chat about Jesus and the saying of grace, there was no hard sell. But I actually liked what I saw and heard.

The helpers and the helped were people from every color of the rainbow. We were a racial mix on both sides of the table. For me, our diversity was a symbol of how homelessness hits everyone. So does a generosity of spirit. We volunteers were told to smile and treat the guests with respect. Give them their dignity. Let them have as many plates of food as they want. If they asked for an extra meal to go, pack it up for them. I lost count of how many guests told me that I was wonderful.

In the dining area, there were pretty pumpkin centerpieces. At each place setting was a pencil and two sheets of paper. The pink slip was an invitation to give your name and write anything you wanted the staff to pray about on your behalf. The yellow sheet listed used clothing items you could check off and receive after the meal — everything from a coat to socks, pants, shoes, shirts, underwear and sweaters.

This party is such a hot ticket that most volunteers can only sign up for a single, 90-minute-to-two hour meal shift between 8 a.m. and 7 p.m. Lucky us, though. Eden Gordon was our hookup to hang out. She coordinates public relations for the mission. We met a while back when she took one of my Mediabistro seminars. That’s my girl!

We’ll have to get her to comment later about today’s final tally. The initial estimate: More than 800 volunteers were expected to serve at least 3,000 meals. In addition to the action at mission headquarters, food went to satellite locations in all five boroughs. Now I understand how much heart and sweat went into producing those numbers. I also learned that my daughter and I are total wimps in the stamina department. 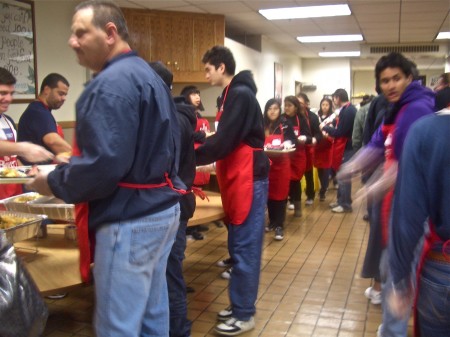 Loading up plates of food to serve the Mission's guests

The Princess has never worked this hard helping others in her entire 14-year-old life. By 2 p.m.-ish, she couldn’t take anymore, walked across the street, got into our car and practically passed out. I lasted until 4. Somehow, I hobbled outta there too. We drove a few blocks to Chinatown for some quick, vegetarian chow. For the rest of the night, we gabbed non-stop about our great experience; we hope to help out again.

What a different Thanksgiving this was. In the decade that I’ve been divorced, The Princess and I have never spent it as just-the-two-of-us. That’s because, well, I felt guilty. After all, her father has a huge family. When we were married, we always had a crowd over for turkey. Now, our daughter alternates the celebrating of major holidays between Mommy and Daddy’s two households. When she’s with me for Thanksgiving, I’ve made sure that we were with either my sister’s family or a group of friends.

Today though, we found a new option and a new crowd. We came into our own. Amen to that.