People who care about writing have a fool-proof test for evaluating how much you know about the form. This test tells them a lot about your ability to pay attention to details and how well you were educated in your English classes.

Unfortunately, many students come into my class failing this test — even the ones from “good” schools. But the problem is easy to fix. Learning this simple grammar  trick shows that you understand how to write like a polished professional.

The solution is quite painless. Instead of writing like a rookie, you’ll have an edge in writing anything — from your next research paper, memo, job application, cover letter, blog post or essay, to your novel. Even your texts or emails will look sharper.

We begin by wrapping our brains around two tiny words. It. They.

The difference between “it” vs. “they”

When students first walk into my class, I find that they’ve grown up barely paying any attention to their usage of “it” and “they.”

But once we go through the issue, everyone gets it. The pay-off comes comes at the end of the semester, when my students are writing like professionals, which helps them to find work and even land great gigs.

Let’s go through a few examples to show you how this works.

Examples using “it” vs. “they”

Okay. Here are two sentences. They sound just fine if we’re talking to a friend because these sentences reflect conversational English. But when it comes to writing, there’s something wrong with the second sentence. See if you can spot the issue:

This is a great restaurant. They have the best bread.

Here’s the problem with Sentence #2 above: There’s only one “great restaurant” mentioned. So if “restaurant” is singular, you can’t use “they.” You have to say “it.” Like this:

This is a great restaurant. It has the best bread.

Of course, this sounds awkward. You would never say that. And you probably would find it too awkward to write — even though it’s accurate. So this is the next step: Rephrase the sentence. Maybe, like this:

These folks run a great restaurant. They always have the best bread.

The rephrasing works because “folks” refers to more than one folk. We have multiples, making them “folks.” Now, we’re dealing with plurals. “Folks” is a “they” concept.

Words that involve “it” vs. “they” issues

By now, you’ve probably noticed that I’ve steered clear of using hard-core grammar talk. Grammar tends to scare people, which is why I’ve introduced you to it-vs.-they  in non-technical language.

But we need a bit of terminology, just a teeny new word: noun.

Students often seem surprised that most “they” words used in everyday conversation are actually “it” words when typed. This happens because the words fall into a grammar category called nouns — specifically, nouns which identify places, ideas or things.

When we talk using words like “restaurant,” referring to them as “they” comes naturally out of our mouths. And that’s totally fine! But when we type or write these words, make the mental switch. Be sure that “it” flows from your fingertips. 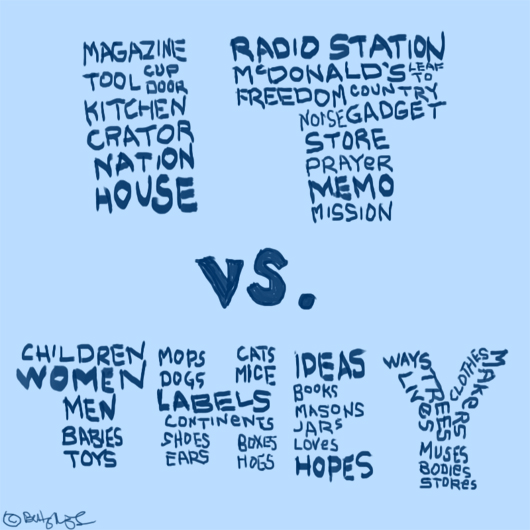 When we write about human beings

In the last decade or so, our views have completely changed on the use of “it” vs. “they” for identifying people. Back in the prehistoric 20th century, I used to be so annoyed with social media sites for sending out this kind of notification:

Back then, it was considered wrong to refer to only one friend as “their.” In the past, the correct grammar for this notification should have been about a friend who “just posted his/her first Instagram photo.”

But that was the 1900s. The 21st century — especially in recent years — has brought a new awareness about gender choices. In our LGBTQ+ world, we show respect for gender-fluid ways to identify ourselves.

And that’s it! You’ve survived this discussion. Congratulations! You now possess a writing tool that instantly makes you a classier, more confident writer.