Since my daughter’s vegetarian and I’m eating less and less meat, we’re always looking for new restaurants that we can both enjoy. Which brings us to Buddha Bodai, a Kosher — yes, Kosher! — spot that does remarkable things with tofu, vegetables and gluten.

For me, the only downside to this place is the gluten, a type of protein found in wheat, rye and barley which can cause skin and digestive problems for many people. You’ll recognize its presence in dishes because it has an elasticity that makes it very useful in creating fake meat that’s amazingly convincing. I can have it once in a while but I usually steer clear of it. Thankfully, there’s still plenty of other stuff on the menu.

My relatives introduced me to this place. We ate there this weekend following the wake and funeral services for our Uncle Fan. Last night’s meal was stunning — be sure to try the mock Sweet and Sour Fish. We had so many dishes that I wondered if I would be sick of this restaurant by today. But once again, BB delivered!

One of my first cousins did the ordering in her fluent, confident Cantonese. Later, I asked her how she selected the dishes.

“All I did was look at the pictures in the menu,” she said. Hey, I do that! But she was being modest because we actually had a few things that weren’t listed.  I’ll have to experiment some more on my own, but I got the impression that the staff is willing to work with suggestions.

I should give a heads-up, however, about the strange English names for some dishes. Even by weird Chinglish standards, this place is pretty far out there. 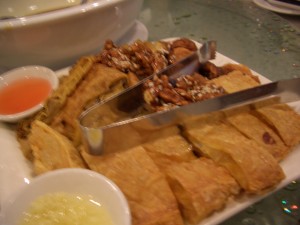 The things you can do with a baguette

Soooo, we began with “Bar-B-Q Veg Meat” ($11.95), which is gluten made to look like roast pork. A bit sweet for my taste but interesting. The other item on this plate was, of all things, a baguette (!) that’s been sliced, stuffed and fried.

There’s a more elaborate version of this plate: “Five Color Appetizers” ($17.95). It also features fake jellyfish, along with squares of tofu standing in for meat chunks. Very inviting.

As for the “Veg. Shark Fin Soup” ($12.95), it was pretty successful once we added a few spoons of the traditional vinegar. After these starters, we settled down for the main courses.

My favorite was “Seaweed Sesame Roll” ($9.95), a sushi roll that had been sliced and fried then beautifully laid out in a circle with a pile of green seaweed salad in the center of the plate. “Oyster Sauce with Chicken” ($12.95)  isn’t actually on the menu but ask for it; this gluten-and-Chinese-broccoli dish rocked. 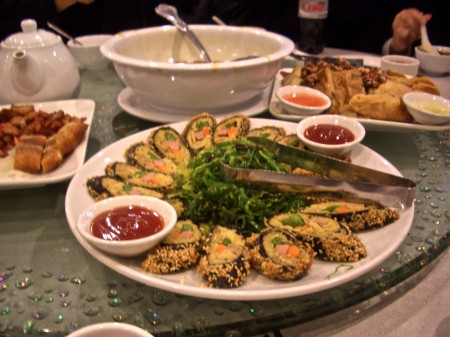 This was my favorite

My least favorite dish was the “Steamed Veg. Chops & Taro” ($10.95). The thick taro slabs were pretty bland but the bed of stir-fried watercress under it was quite good. Our final dish was oddly called “Lettuce Song,” ($11.95), a delicious arrangement of iceberg lettuce leaves which we used as burrito-like wrappers around a filling made chopped gluten and pine nuts.

I’m not adding the link to Buddha Bodai’s website because when I clicked on it, nothing happened. Maybe the best thing to do is just visit Chinatown and check this place out. There’s more stuff I want to try. I can’t even imagine the contents of “Funkiness Fried Rice” ($8.95). Or what about “Spicy Laksa Noodle Soup” ($6.50)! If you find out before me, please drop a line here so that we can compare notes.